They’ve been around for over a decade now, but cardboard coffins still aren’t a popular choice for families. One reason for this is because they are not automatically offered by most funeral directors, with families needing to specifically request them to be ordered in.

But just because they aren’t commonly used, doesn’t mean that cardboard coffins are a bad choice for families. Over the past 5 years there have been significant advancements in technology and construction, making them a safe and reliable option. When you consider that all coffins either end up in the ground or as a pile of ashes, you might agree that spending $2,500 – 10,000 on a fancy coffin is, quite simply, a waste of money. A cardboard coffin can be a good alternative to think about. Here’s what you need to know.

What is a cardboard coffin?

Aside from the obvious (that a cardboard coffin is a coffin made out of cardboard), cardboard coffins are typically constructed with a sandwich of honeycombed cardboard (similar to the method for constructing an internal door). They are very sturdy, and a load test of Leaving Lightly’s “Iluka” Cremation Capsule showed that it took over 220kg of weight to break the container.

Don’t get confused by the terminology. Heard of an “enviroboard coffin”? That’s a type of cardboard coffin too, except with a fancy name so families don’t get scared off.

What types of cardboard coffins are available?

At the simplest level, families can purchase a cardboard “cremation capsule”. This is a very simple cardboard coffin that is designed for cremation only, typically without a service. It’s only job is to satisfy the regulatory requirements for cremation. For more information on cremation capsules, see our guide to coffin prices.

If the coffin is going to be seen at a service, then you can purchase more expensive cardboard coffins which can actually look quite similar to traditional coffins, complete with gloss finish, double lid top, bras handles, and white velvet lining.

But when most people think of cardboard coffins, they think of coffins that can be customised with photos or designs that are meaningful to the deceased.

Taking things a step further with custom designs, some individuals have been known to get more creative.

Do you know someone who would be at home in a coffin adorned with the colours of their favourite rugby league team?

Or how about this for someone with a sweet tooth? 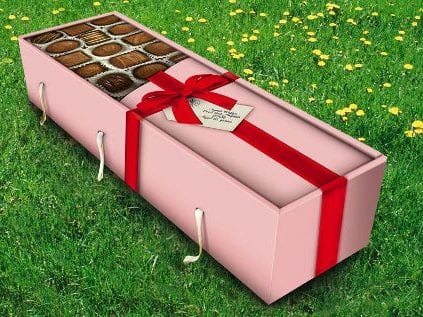 Or who loved a glass of red? 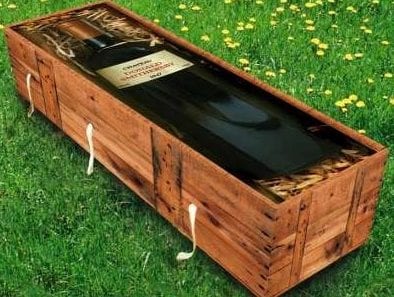 Frederick Lee, an Irishman who made his fortune making the cardboard tubes for Johnson & Johnson talcum powder was famously buried in a custom-made cardboard tube in 2016. 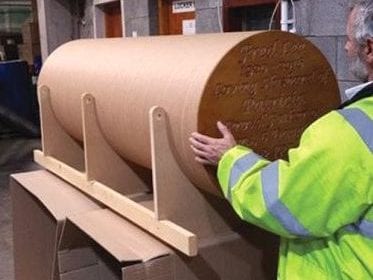 How much does a cardboard coffin cost?

Contrary to what you might think, not all cardboard coffins are cheap, with many being more expensive than basic wooden coffins.

The cheapest cardboard coffin would be for a cremation capsule (described above) for between $400-600 – about half the price of your starting wooden coffin. Using a cremation capsule can be a way to lower the cost of a cremation. For more tips on arranging an affordable funeral, see our Guide to Cheap Funerals in Australia and our article on tips to save money on funeral costs.

Are cardboard coffins permitted in Australia?

Yes they are, but you should be aware that each state has different regulations, so not all cardboard coffin styles and manufacturers may be suitable in your location. The “Iluka” cremation capsule by Leaving Lightly, for example, isn’t permitted in South Australia. It’s best to ask your funeral director for guidance on your state’s regulations.

If you are environmentally conscious, cardboard coffins can be a good choice, as they cremate with approximately 90% less carbon emissions and are constructed with between 70-95% recycled material. Wicker coffins are also offer an environmentally friendly option. Cardboard and wicker coffins are often used in green funerals as they are 100% biodegradable.

Where do I get a cardboard coffin?

Funeral directors will buy from the manufacturers. Some of the main manufacturers in Australia are LifeArt (owned by Australian funeral giant, InvoCare), Leaving Lightly, Lifestyle Coffins and Expression Coffins.

Whether it’s to save money, make a statement or create something that’s meaningful and sentimental, cardboard coffins offer a unique option for families to consider. Let us know what you think!